So, you’ve got a business idea that feels like it’s got potential. When you imagine your life in your new role, you get so excited… and then afraid.

Will it actually work? How much money is it going to take to get it off the ground? Will my partner and family support me?

So often, our initial rush of excitement fizzles into fear. We get paralyzed because we’re unable to come up with a solid plan to get us from Point A (having an idea) to Point B (making a living doing what we love).

So, we end up putting the whole thing on the back burner and stick with what we’re already doing now.

How do we take a big idea and actually turn it into a business? There are definitely better and worse ways of doing this. I’m going to share with you a better way that takes a lot of the pressure off your shoulders.

Yup, you’re scared for a good reason. If you took your idea and ran with it alone, the statistics are pretty clear on the matter: it’s not likely to go well for you.

This is because it’s just not possible to see all the opportunities and dangers at the beginning. You’ve thought your idea through from every possible angle, but despite your best efforts you can only see about 25% of the whole picture.

It takes the other 75% to actually make it a solid plan.

But here’s the good news: your 25% idea could very well have merit. It just needs development before you run with it.

And here’s where I’m going to give you a leg up: that development needs to come from outside of you.

So, stop planning your whole future out for a moment and let others help. I’m going to teach you how to leverage others’ feedback to expand your opportunities and minimize your risks.

It takes a village to raise an idea

Our ideas need to grow, change and evolve a lot before they reach their true potential. In my experience, the quickest and most effective way to do that for career ideas is by tapping into the thoughts and experience of others.

This method, of evolving ideas from “a good start” to “brilliant, I’m in!”, came from Disney’s creative department; a powerhouse for bringing new ideas from inception to successful production.

Disney produces films that consistently delight families, influence our popular culture, and also put food on the table for the company’s employees. We see a polished final product, but every movie starts as an incomplete, even foolhardy idea.

Disney’s creative department has figured out how to turn that risky, unfinished idea into a masterpiece, and you can use their method for your own business ideas.

Here’s how they do it:

Disney splits its creative department into three types of people:

The Dreamers’ job is to come up with as many amazing, creative, outlandish ideas as they can with absolutely no concern for how to make them work in the real world. (that’s you in this case, coming up with your career or business ideas) Once they have ideas they love, they bring them to the Realists.

The Realists’ job is to take the Dreamer’s idea and say “Wow, that’s so cool. Okay, how can we make this work in the real world?” They’re like engineers and problem solvers, brainstorming and prototyping until they figure out how to work the idea into something they feel will be a fabulous success. At this point, the idea is still only about 80% complete. They then bring the idea to the Critics.

The Critics’ job is to think of anything that could possibly go wrong. How could we get sued?  Will this offend a cultural group or religion? How will this hold up over time? They identify a number of problems and give them back to the Realists.

The Realists’ job is now to say “Wow, I never thought of that! Okay, here’s how we could solve that problem.” By the time the Realists and Critics have gone back and forth a few times, the idea has gone from good to great to brilliant. It is now ready to turn into a real-world product or service.

The key to this process working is the separation of roles. The Critics aren’t consulted until the end and are never allowed to talk to the Dreamers.

They work in separate buildings and never meet, not even for Christmas parties!

How to evolve you idea

You can evolve your idea from a good start to feeling bulletproof in a matter of weeks just by sharing it with these three types of people in that order.

Instead of relying on your own internal dreamer, realist and critic to somehow cooperate from day 1, you are outsourcing the process to the much wiser group mind. You’ll be getting so much valuable feedback that you couldn’t possibly have come up with on your own, no matter how much of a subject matter expert you are.

Involving others in our messy, somewhat embarrassing initial versions of an idea can be the difference between businesses that succeed, and those that fail. Just remember – the dreamers and realists are the only ones who get to lay their eyes on the first drafts!

You’ll also know more about your market and how people receive your idea than doing market research alone.

By the time you’re done, you will have a plan that is 10x more likely to succeed, fills you with confidence, and is way clearer. As an unintended bonus, you will attract a tribe of supporters who are now invested in your success.

How to Develop Your Idea

Start by identifying who in your life are your Dreamers, Realists and Critics. Choose people in the same city if you can. These conversations are best done in-person. 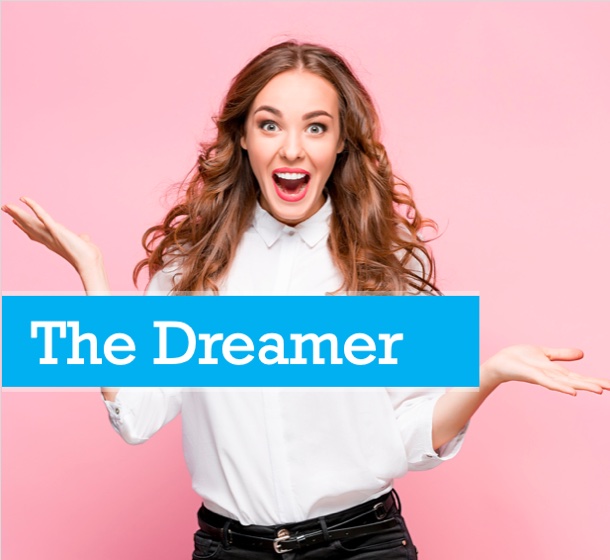 Dreamers are optimistic, enthusiastic, creative, sometimes flakey people. They are a resounding “You can do it!” to anything you come up with without really thinking it through. They love starting things but aren’t always good at completing them. You feel totally safe sharing with them because you know they aren’t going to be critical or shut you down.

Who do you know in your life like that or close to that? Write down at least two people.

Now what? You’ve got to reach out and call them! Yup, this is definitely a vulnerable step, but think of it as a step toward financial safety and career freedom.

After you’ve had some wildly inspiring conversations with dreamers, your idea may be a bit more fleshed out in your mind, but it’s still incomplete. 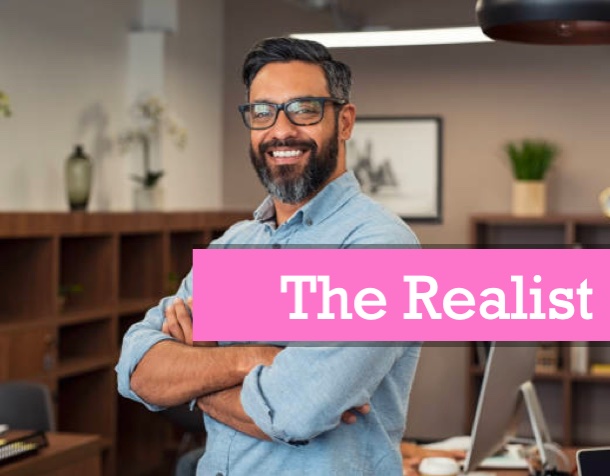 Realists are your problem solvers. They are innovative, resourceful, strategic people. They are often good at building, fixing things or making things work. They can be annoying to talk to because they’re always trying to solve the problem instead of just listening.

Your Realists are going to help you figure out how to actually make your idea work. See a business model you never thought of, clarify your target market, connect you with a key person, brainstorm potential partnerships and so on. Nuts and bolts stuff that’s fun to plan out at this stage.

Who do you know in your life like that? Write down at least two people.

Now it’s time to share with your Realists. Let them know what you’re up to, what you’re thinking of, and share your problems. They love digging into clearly defined problems.

The conversation should naturally flow toward “hrmm. wow, you could totally do ___________” or “have you ever considered linking up with so-and-so? I think what you’re offering would align well with what they’re already doing.” Let your Realists do their magic.

After you’ve had some conversations with Realists, who are going to be giving you some very practical ways to make your idea a reality, you’re probably going to be even more excited than ever. You may think, I’m good to go! (Hold on, you’re still not there yet!)

Or, you may be ready to get some advice for those fears that keep popping up. The ones that stopped you from going full steam ahead and have you reading this article. This is where the Critics come in. 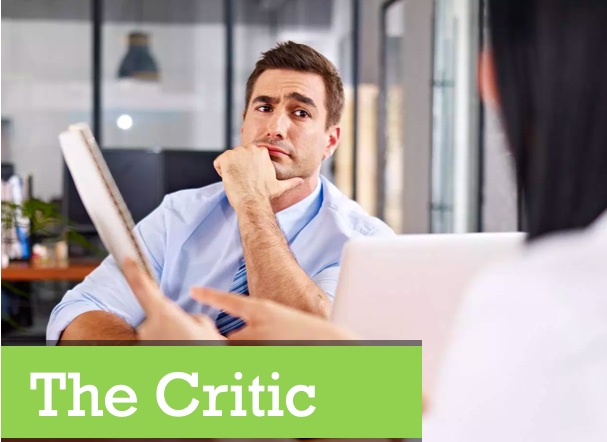 Critics are our “Yeah, but” people. They don’t get excited when we tell them new things. Instead, they often look concerned, like they’re biting their tongue. They are. They’re regularly scanning for danger, looking for all the things that could go wrong. They know people don’t enjoy their feedback, so they usually keep it to themselves.

It’s easy to be annoyed with critics, but they serve a vital role. They are our protectors, looking out for us when we are biased or overly optimistic (which we often are when excited about a new idea!), ensuring we don’t get burned. Your mom and your spouse will likely play the Critic role, even if they are Dreamers for everyone else.

Your critics could save you months of time or thousands of dollars by pointing out that there may be a better way to do something. Or there may be a big risk that you’re unaware of, that could cost you a lot in the future.

Who do you know in your life that often plays that role for you? Write down at least two people.

Now it’s time to start sharing with the critics and hear what they have to say.

But remember, don’t let them try to solve the whole problem. They’re better at raising the alarm than putting out the fire. You want to bring their concerns back to your realist tribe and brainstorm some great solutions that keep your business idea going forward.

After you’re done developing your idea with your Dreamers, Realists and Critics, it will have evolved considerably from when you first started. You may even be taking things in a direction you never considered before!

Now you have a team or people in your corner, and an idea that has had many minds working on it. It was allowed to breathe and grow, and thanks to the separation of the three types of people, it wasn’t quashed before it was ready. Now you can feel safer about taking your first steps as a new business owner.

Good luck! Let me know how it goes. And if you’d like support in determining the ideal career for you, I invite you to connect wit­­h me.

About the Author: Jeff Baker